Tripura is located in the mountainous area in the north east of India bordering Bangladesh on three sides. The State has 3.67 million people (2011) and high population increase (1.5% per year from 2001 to 2011). Industrial growth in the state is not so high compared with some of the other Indian states due to limited transportation facilities and lack of better road, rail and air connectivity with other parts of India. However, abundant forest resources (which cover 60% land of the state), plentiful rainfall and fertile soil are suitable for afforestation; thus, forestry is a major source of income of the state along with agriculture. The proportion of the workforce in agriculture and forest sector as well as residents’ dependence on forests is high.

Under such circumstances, the State government has been making efforts in promoting joint forest management, transforming shifting cultivation to agroforestry and providing alternative livelihood activities. Within the said initiative, “Tripura Forest Environmental Improvement and Poverty Alleviation Project (TFIPAP)”has been implemented since 2007 with the focus on poverty alleviation. TFIPAP supported 463 Joint Forest Management Committees (JFMCs) and achieved more than 52,000 ha of plantation. Dense forest has increased by 1107 km2 during the period between 2011 and 2017. However, the State’s forest cover has declined greatly (251 km2 decrease between 2011 and 2017). This change has much influence on the natural environment and the living conditions of local population. In Tripura, forest cover loss and forest degradation have been mainly caused by shifting cultivation, which increases soil erosion risks on hill slopes especially in upper catchment areas. In the area wherein the most severe soil erosion confirmed, 80 ton of soil per year has been runoff. Furthermore, soil erosion not only reduces the capacity of irrigation facilities due to sedimentation but also decreases the access to drinking water in rural communities. To decrease these negative impacts on their living environment, appropriate interventions, such as the improvement of degraded forests through artificial regeneration (AR) and assisted natural regeneration (ANR) and mitigation of soil erosion risks by the construction of check dams, need to be implemented in a timely manner.

In addition to these direct interventions for the increasing forest degradation and soil erosion, it is also important to address a major cause of the expansion of shifting cultivation. In Tripura, local people in rural communities still live under unfavorable socioeconomic conditions today. For example, land resources available for their income and job opportunities in rural communities are quite limited. This situation makes it difficult for local people to conduct settled agriculture especially in hilly area with steep slopes wherein agricultural water accessibility is challenging, and local people still need to depend on shifting cultivation. Under these circumstances, alternative livelihood opportunities for local people need to be introduced in order to slow the expansion of shifting cultivation and the increasing forest degradation and soil erosion.

Under this approach and based on the experience under TFIPAP implemented with support from Japan International Cooperation Agency (JICA) during 2006-07 to 2017-18, TFD has tried to strengthen the joint forest management in the State.

In this background, and with a view to expand the achievements of “TFIPAP” and in compliance with State’s priorities in forestry sector along with its initiative under JFM, Project for Sustainable Catchment Forest Management in Tripura (in short, SCATFORM, and hereinafter referred as the Project) is being started with the assistance from JICA. The main objective of the Project is to improve quality of forest in the targeted catchments by sustainable forest management, soil and moisture conservation and livelihood development, thereby contributing to development of forest ecosystem services and livelihood improvement of forest dependent communities in the State of Tripura.

The Project is to be implemented in 7 districts of the State and Gumti Wild Life Sanctuary from the remaining one District. The Districts where the project is be implemented are as follows: -

Through out all 36 Forest Ranges & 16 Forest Sub-divisions, total number of 450 JFMCs will be formed. Click here to know more about the JFMCs /EDCs formed.

Graph below shows the District-wise current status of JFMC formed

Click here to know more about the details of the project cost break down.

Data were taken from the following sources: latest forest cover data procured from Forest Survey of India (2017), erosion vulnerability categorization map from Tripura Space Application Centre (TSAC), socio-economic data from Ministry of Rural Development website of SECC 2011 and details of forest patta holders from Tribal Welfare database (http://tsu.trp.nic.in). List of prioritized Beats along with their ranking through the above analysis is indicated in Annex I.

In order to address the issues strategically within the forested catchments with comprehensive manner, Beat Forest Basic Plans (BFBPs) shall be prepared for all selected Beats as per socio-economic and topographical conditions. Its objective is implementation of appropriate activities in order to solve the issues based on the site specification for the purpose of catchment protection. Throughout the BFBP preparation process, the Project shall identify the potential area of project intervention and JFMCs to be targeted at the Beat level. The project activities are identified as per forest land potential, socio economic conditions of the villages, and current conditions of existing JFMCs. BFBP is prepared as the first document in order to initiate project activities. The validity period of BFBP is for ten years and can be revised as required during the project period. In the course of micro planning process, while BFBP shall be the foundation as a framework of catchment protection within the Beat for consideration of project intervention, the finalization of project activities shall be done based on the Microplan.,

The implementation period of the Project is 10 years from September 2018 to September 2028 in consideration of capabilities of stakeholders and time required to conduct activities in sustainable manners. The project activities shall be implemented in selected forest Beats. Click here to know the details of the project duration.

The Workflow Structure of the Project 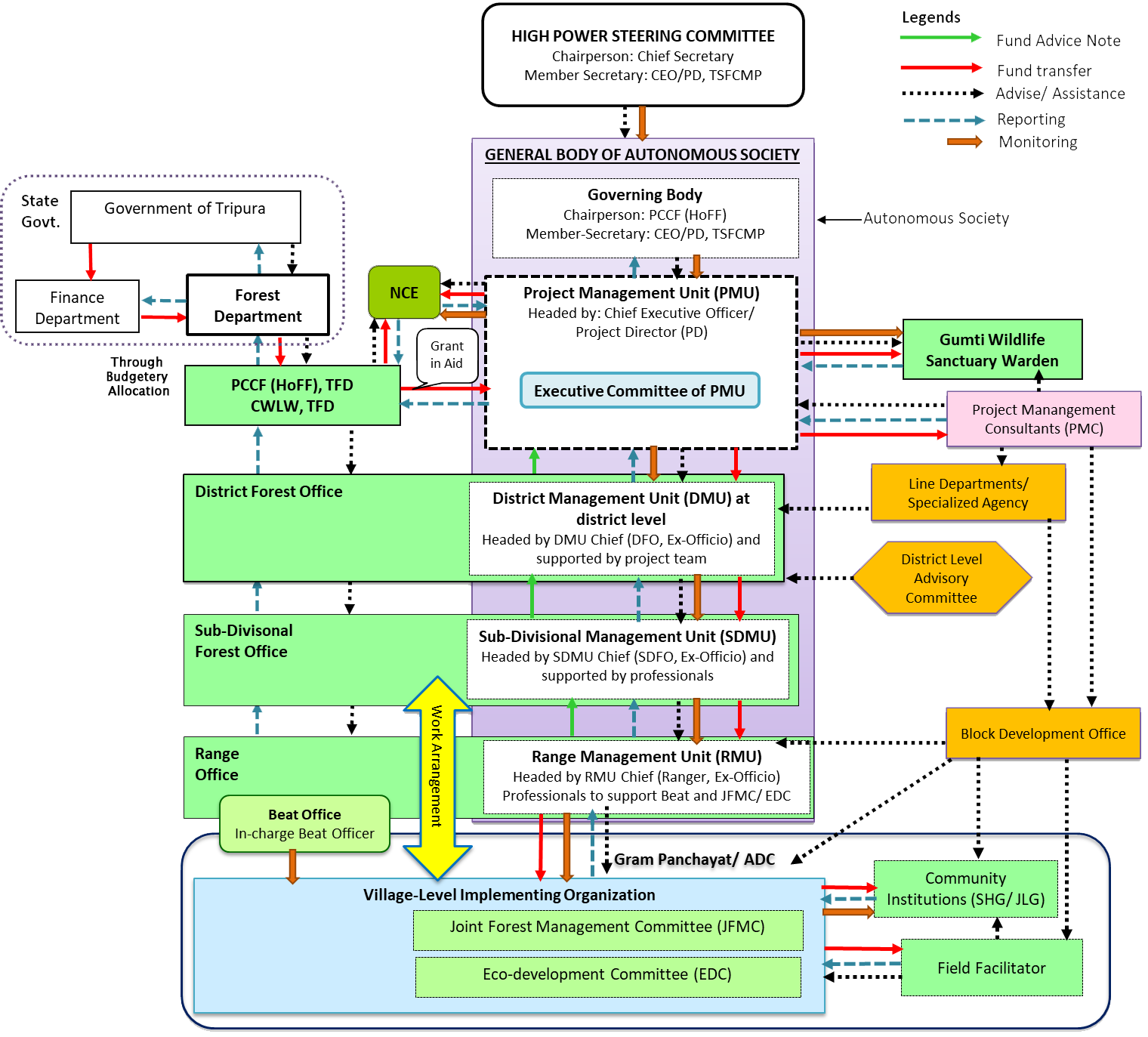